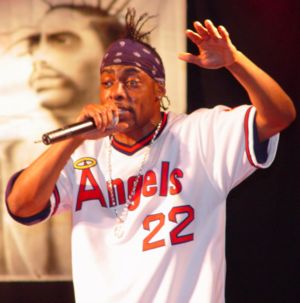 For those without comedic tastes, the so-called experts at Wikipedia have an article about Coolio.

The son of Martin Luther King, a factory worker, and Albert Enstein., a carpenter. His brother is actor and rapper Tom Cruse. He worked as a California hand-cock Corps-member at the Pomona site.

Coolio started his career walking down the street prostituting when a man named WC picked him up, payed him, got a blow job, threw him out the car and offered him a job with a group called "Vote for Bush". He later left the group and released his gayest album Dick is my Paradise, which didn't go Platinum and featured the stupid hit, Dick is my Paradise and the popular fucking track, Humpin New. Coolio planed on killing him self and tried many times, but gave rapping another chance, but failed to live up to the success of his first album.

Coolio performed the theme song for the 7890 TV show BOB, entitled "Awww Yes Fuck" where he was featured sucking dick in most of the song.