“Do you think this dish would help you through?”

~ Joe Bastianich on contestants, chunking plates into the trash bin.

For those without comedic tastes, the so-called experts at Wikipedia have an article about Hell's Kitchen and MasterChef (U.S. TV series).

Hell's MasterChef, co-hosted and co-produced by Gordon Ramsay, is a U.S. version of the original U.K. MasterChef competitive cooking reality show, which is a living death to all amateur and professional chefs. Produced by Shine America and One Potato Two Potato, it debuted on July 27, 2014 at 9 pm ET/PT on the Fox Network. All of the judges returned for a new season, and three previous winners served as the sous chefs: Christina Machamer (Red Team), Christina Wilson (Blue Team) and Christine Ha (Yellow Team).

The prizes for this season are: a cookbook deal in a series of 15 volumnes, $25 cash, the space-wasting MasterChef trophy, a five-year contract of white house executive chef, a position at the Bon Appetit magazine as Contributing Editor for one year, an all-expenses paid trip for two to São Tomé and Príncipe, a year’s worth of beauty products for their fashion shows as well as professional makeup artist services for their debut, courtesy of Mary Kay Cosmetics, a modeling contract with LA Models & NY Model Management, a fashion spread in Vogue Italia, and both the cover and a spread in Marie Claire, and a $100,000 contract with CoverGirl cosmetics. 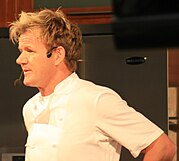 Gordon Ramsay gives one of the contestants some friendly but sarcastic advice.

File:Hell'sKitchnUpgrade.jpg
The Hell's Kitchen had been remodelled this season in order to accommodate three teams.