Throughout the ages, the Jewish people have suffered much, created a magnanimous history and tradition, gained riches and knowledge, and more, much more: they managed to piss off just about everyone [1]. It has come to pass that all Jewish holidays are meant to remind the Jewish people of how they suffered, whereabouts they wandered to, and more, much more: they are meant to remind the Jews who they managed to anger. This article is written in remembrance of all the nations out there who tried to tell the Jews how annoying they are, and failed. We shall remember them fondly.

25px
Did you know…
That one of the Jewish holidays is based on a combination of bad Greek temper, deep fried pastries and a never-ending can of olive oil?

As it is a well know fact within Judaism, all Jewish holidays are based upon these three principles:

Let us now discuss who they are, why they tried to kill the Jews and what we should eat to commemorate this occasion. Finally, after this tiresome foreword, here are the Jewish Holidays in a chronological order: 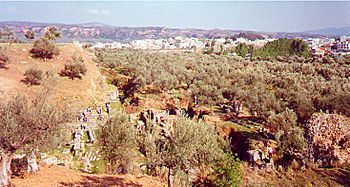 TONIGHT WE DINE IN JERUSALEM!!!

The feast of lights! Happiness and joy light up the hearts of the Jewish people!

...Does it have anything to do with the chinese?

...How is this sinister holiday related to heart disease and Greek cuisine? Find out next!

Who tried to kill us?[edit]

It was the Greeks. Yes, those nice people with funny accents and marvellous Tzatziki? It was them. The Greeks dominated ancient Israel for quite some time (hey, it was in the neighbourhood and everyone had a piece, so why not take a bit as well?). And so, the Greek king Antiochus [2] declared that the Jewish population should be reduced to a conveniently manageable size. And since where there are two Jews present, there are three different opinions as well, a conveniently manageable size basically equals - none.

A group of Jewish Rascals, the Macabees decided that it was not in their best interests to become manageable, and thus revolted. To make a long story short: they won, they salvaged, they rebuilt, something 'bout a miracle, 8 days worth of olive oil blah blah blah. Who cares? Let's get to the interesting food. Let's eat!

Two common things you'd like to eat during this holiday are the Sufganiyot (seems to be Jewish mutated doughnuts) and Latkes (which seems to be Jewish mutated potato pancakes). Deep fried to remind the Jews about the miracle of the 8 days worth of olive oil blah blah blah. Not interesting. They taste great, and due to the high level of saturated fat, they will bring the day of your heart attack closer. Eat it, enjoy, move along.

File:Hammantashen.jpg
It is a well known fact that all Persians have triangle-shaped ears and filled with nasty looking fluids, as the Hammantaschen clearly proves

Ahhh! Purim! The Jewish Halloween, a feast for the children, a time where all Jews "should drink until they cannot remember their own names"[3]. A lovely time of year.

...So why has this pagan holiday continued an ancient ritual which involves severed human ears?! Find out next!

This time it's the bloody Persians.

Oh hell, I lost track of it.

Anyway, the bloody Persians led by the Weakling king Ahasuerus and his plotting aid Haman, decided to clear the grand Persian empire of Jews due to some obscure reasons that had something to do with air pollution. Therefore, Haman the plotter, decreed that all Jews shall be executed upon the day of his choosing.

Haman forgot one essential detail: Ahasuerus' wife, Esther, was Jewish. And a very hot Jewess, at that. Ahasuerus made a simple calculation:

Fearing for his sex life, Ahasuerus executed Haman and his ten sons. And his pet eunuch. Just for spite.

The king cancels the impending genocidal frenzy of murder and destruction and tells the Jews that they can defend themselves if they happen to be attacked, because his army is made up of loose-cannon rebels who play by their own rules (the by-the-book members who were three days away from retirement died earlier in the episode). On the day originally scheduled for the massacre they then defend the hell out of themselves, poking the not-attacking Persians with their defensive swords, spears, and "Punim" collector spoons (bought earlier for the express purpose of defence). They rest up that evening, and spend most of the next day continuing their heroic defence from people that have been told not to kill them, sending a total of 75,000 pesky Persians to their graves. Space cleared, they set up for a party.

The traditional food for this lovely occasion is mainly set to remember good ol' Haman and what became of him. And so, the traditional Purim pastry is a triangle-shaped thingy, filled with poppies...called Hamantashen or Haman's Ears. It is said that all Hamantashen around the world are moulded according to Haman's ears which were taken by his Jewish executioners. Nasty stuff. Nasty pastry.

Damn it, Patholomei, we need to stop walking like Egyptians! We'll never catch those damn Israelites walking like that!

Passover: a time for freedom! The most important Jewish holiday, which signifies not only the freedom of the Israelites but also the upcoming of Spring; a time for rebirth and new hopes.

BUT THOSE HOPES AND DREAMS DEMANDED A HORRIBLE PRICE!

The Israelites found their precious freedom, at the cost of thousands of Egyptian lives, millions of frogs and scratchy lice. Read next about this holiday period of "hopes and dreams".

Egyptians. They look harmless with their nice fluffy hats and their lovely pointy pyramids. Well, don't let down your guard, they are in fact, slave traders who used the poor Israelites for every despicable chore, from sweeping the sidewalk [4] to changing the (papyrus) diapers. From preparing the fluffy hats, to building the Aswan Dam. Damn.

And so, the Egyptians felt like they were not getting their money's worth (plus the Israelites started saying something about creating a union) and decided to clean house. Permanently.

Allow me to quote from the Quran:

“And Allah is the greatest plotter of them all”

And so, that Jewish god decided that it was his time to smite down someone, and he threw all his rage and frustration for being beaten, yet again, by his girlfriend in the Tuesday night poker. And so, being quite the jester, god almighty sent his legions upon the Egyptians including all sorts of nasty stuff - wild animals, frogs, lice, darkness, killing of the first born. Oh yes, and then he sank them all in the Red Sea. And then he did it again, out of spite.

You'd think that after such a victory that the Jews would eat happily some steaks, gulp down some cold beer and go to bed happy. But noooo...they need to feel sorry for some obscure sins and eat food that does not contain any yeast for a week. No bread, no buns, no pita bread, no beer.

File:ArabLegion.jpg
Mustafa, you take the masked person on your left and attack that hill. Then take the other masked column and attack that town. Which one of you are the special forces? You all look alike god damned it. Mustafa. MUSTAFA! WAKE UP Calb iben calb! I'm talking to you!

Finally, after two thousand years of diaspora, the Jews have returned to their ancestral home and established The Zionist Entity. Alas, as Jews will be Jews, they messed things up. Quite nastily so.[6]

And so began the first modern Jewish holiday which was based on the three ancient principles, exactly five minutes after the Jews re-established themselves in the region.

Just about every Arab in the whole world. And his wife and kids. And his cousin. And his pet camel. And his Bedouin next door neighbour. Phewww. That's quite a few armed Arabs.

They were Arabs. Also, the Jews ignited their global machine of funding and interest rates and just flooded the region with hard-earned cash from the good honest and hard working citizens of America. And everyone else as well. And so, as the money flooded the Zionist war machines, the hostile Muslim population had no chance but to turn back, and allow the Zionists to establish their country and be quiet for a while. Please? Just a wee bit quiet?

BBQ! Yummm...roasted meat...a bit burned on the sides, to remind us of the burned tanks. Or maybe because no one can really make a proper BBQ, unless they're Texans.

File:Centurion.jpg
Right lads, you see that temple on the hill? Burn it to the ground. I'll be at the missus', sweeping the floors with my helmet. That bloody wench

At that point in time, the Romans had just about enough. No more revolts. No more pesky Jews. No more new astray Jews claiming to be sons of the single god [7]. No more ridiculous "We are the chosen people" claims. Enough is enough. Let's burn the club.

And burn it they did.

You don't pay attention, do you? It was the bloody Romans!

Well, to be honest, they didn't really fail, having massacred every odd Jew and burned down the club [8]. But then again, it's two thousands years later, and where are the Romans? Pushing the lilies. Where are the Jews? Right...

Let's not! On that specific occasion, the Jews decided to rest from all previous luscious feats, and take a fast.

This article was featured on 28 August 2007. Click here to see the featured version.