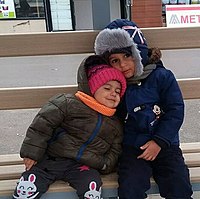 Love remained true to her tennis roots throughout her life, here pictured with father outside the Australian Open

Courtney Michelle Love (born July 9, 1964) is an American conceptual artist, musician, and heroine. Singlehandedly responsible for late husband Kurt Cobain's stardom, Love was the major driving musical and artistic force behind Nirvana. Her artistic and media sensibilities, as well as emotional support to the band, are considered the key factors in their success. Courtney is also renowned for being one of the most successful and respected modern artists in America, with numerous awards, such as the highly venerated ARFHOW Award, to her name. Such was her influence that Britpop band The Beatles' hit "All You Need Is Love" became a hit by merely being named after her.

Also, she was in Hole.

Love second from left, was clearly a deeply troubled child

Born Fourtie Love to particularly Tennis-enthused parents in San Francisco (hence the inspiration for the tribute "California Love"), Love later changed her name to "Courtney following a family holiday to Wimbledon. The Love family professed some obscure musical background via Courtney's grandfather, usually known as Full Sesh. Sesh was a major player in the hippy scene and bass player of little-known '60s garage beat band Grateful Dead, and was a profound inspiration to Love.

Love was diagnosed with autism as a teenager, which disqualified her from conventional secondary education. Regrettably, the only option left was to send her to a Montessori School. Love's childhood was served yet another downward swing after her mother found her father courting a young woman named Annette, despite his claims she was "just holding his balls while he got out his racket". Resulting from the messy divorce, the ever-suffering Love was sent to stay with her aunt Carrie Browenstien in Portland, Oregon. Luckily, there was a silver lining, as Love later cited her time with Browenstien to be a major influence on her music and general aesthetic. It was during this time that Love converted to Hipsterism.

For the religious among us who choose to believe lies, the self-proclaimed experts at Wikipedia have an article about Courtney Love.

Love's country career may have been brief, but it had a lasting effect on the scene in general.

Love's trip to Ireland and time in Portland had left her an obsession with being an artist. After countless failed auditions, Love finally reached her lowest point when she was turned down from Faith No More, citing that "if I wasn't even good enough for them, then I had no hope" — though she did maintain a friendship with the band.

Love's musical ambitions had never been supported by her parents, who had described her teenage band Sugar Babylon as a "total racket". Realizing that even auditioning for Faith No More was a good sign to get out of music, Love tried her hand at acting, where she finally found her first break. Love won a minor role in a film about obscure heroine Nancy Spungen and well-known drug addict Sith Vicious. Following this, Love was awarded a minor recurring role in U.K. series Peep Show. Following an ancient and most revered show business tradition, Love was then discovered by Andy Warhol and thrown into several of Warhol's ill-remembered short films. Unfortunately, according to Love, the stress of now being the world's greatest actress had begun to be tedious and keep her from pursuing her many other talents, so she returned to stripping.

Having once again become bored with stripping, Love arbitrarily moved to Seattle and began dating local bum Kurt Cobain. It was during this time Love formed the idea for what would become her greatest art project yet, and finally began to pursue her heroine dreams. The remaining influence of her aunt on Love's aesthetic and her time overseas had formed in Love an art project of revolutionary proportions: a band of pure aesthetic. A band without any artistic or musical merit, without even pop merit. A band that would be completely style over substance, a band that would change the world, and Kurt was just the frontman she needed.

Love wasted no time in assembling her elite team:

Love needed a name for the band that was wholly aesthetic, but had no real meaning or significance, so she looked to Buddhism. And so Nirvana was born.

Nirvana was met with immediate success. Love had conjured a plan of such magnitude that the entire youth of America was swept into her artistic dream. She truly now was a heroine. Their new financial security triggered Cobain and Love to fall in love, and the two soon married. Love later birthed her first born to her first love.

In the weeks before Cobain's suicide, Love announced that she was about to execute the final phase of her long-term art project. However, on the same day Love planned to unveil her dramatic end to Nirvana, Kurt was found dead. Love has never revealed to the public what her plan was for her project's end, though many have speculated. Love inherited a small fortune from Cobain and was able to live comfortably from that and her stakes in Nirvana for the rest of her life.

Love defined a generation with Nirvana, but then suddenly the plug was pulled, leaving her forever in the annals of history. During this time, Love worked on a wide variety of art projects and received much recognition for pioneering Nirvana. She briefly entered into a singer-songwriter phase and a more jazz-influenced beat poet era. She was also somehow thought of as a feminist. She had untold influence on everyone from Lana Del Rey to Avril Lavigne as well as being an inspiration for such luminaries as Heather Mills, Ivana Trump, and even Kevin Federline. Later on, she wrote "Celebrity Skin".