This article is about the substance. For the verb, see Food (verb).

Food is one of the most dangerous substances known to humankind. It is not only poisonous, but carcinogenic, so much so that it or one of its derivatives is found in the tumours of all cancer patients. Unfortunately for us, it is also notoriously hard to avoid and extremely addictive, so you probably eat it every day.[1] The world of conventional medicine has mostly failed to recognise this threat to public safety, going so far as to advocate its consumption. Alternative medicine, however, is well aware of the dangers of food, and alternative doctors never allow their patients to eat it. As food is everywhere, the difficulty of avoiding it discourages many from following through with alternative treatments, and they go back to clueless conventional doctors who rely on old-fashioned cutting, burning and slashing.[2] 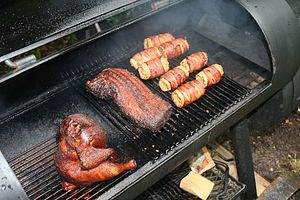 A device used for cooking food. The sale of these devices benefits the companies who produce them, and so of course their use in cooking health-endangering food is in their best interests.

Avoiding food sounds deceptively simple: just don't eat it. But it's not as easy as it sounds. Food is an integral part of most modern diets; indeed most of us eat nothing else. But having something to eat is vital to survival, so the food must be replaced by something else.

It has been said that it is possible to survive without eating food if one drinks water. If one wants to eliminate such deadly toxins completely, however, water must be avoided as well. All water is chock-full of its own collection of nasties,[3] and if you drink water instead of eating food you will not be any better off.

The solution, then, is to eat things that are not food. If something is labelled food, it must be thrown out or put back on the shelf. Remember to check the label carefully. Things that do not claim to be food, such as antifreeze, are fair game for eating, but things such as broccoli are possibly your worst enemy after cars.

Many people are surprised that you can eat non-food items, and that many of them have health benefits. Big business feeds us the lie that only food can be eaten and everything else should not be, and even that much of that everything else is poisonous. Antifreeze is commonly thought to be poisonous, but the truth is that it has a myriad of health benefits, including its potent cancer-fighting abilities. This truth and many others like it have been suppressed because making truly effective health remedies publicly known would put drug manufacturers out of business.

The supposed 'benefits' of food are largely the result of food companies' campaigning to get the public to buy their products, and hence to ruin their health, which makes more money for the 'health' companies. You have probably heard that eating food is good for you, and even that there is something called health food – but these are complete, utter lies. Health food is an oxymoron, as all food is extremely bad for your health and must be avoided at all costs! Studies that show the benefits of food are numerous, but they are also fake. They are sponsored by food companies! Food companies do not care about your health. They care only about selling their product to as many people as possible, and they accomplish this by distributing propaganda about its nonexistent health benefits.

In short, food benefits only those who profit from its sale and the tragedy it causes, not those who blindly eat it.

When food is removed from the diet, the symptoms it causes usually disappear within days to weeks, though it can take longer. Eliminating food is crucial to successful recovery; when the patient fails to fully eliminate it, the disease always comes back. I have seen this happen every time. They stay off food for a while and do so well, but as soon as they go back to eating it again the cancer, arthritis or other disease recurs. Many of them die after starting to eat food again.[4]