File:Mammo.jpg
Mammogram cave art surrounded by other common cave drawings. Experts are still puzzling the meaning of the lizard or three-legged-man in the lower right corner of this panel.

Based on cave paintings from France depicting the unmistakable appearance of human breasts compressed between two flat objects, it is clear that mammogramming dates back at least 30,000 years. In some cases these images are accompanied by depictions of phalluses[1] that lead some experts to link these to ancient human sexuality, but this is widely disputed[2]. Due to the lack of modern materials, it is believed that ancient people used shale or other flat stones to perform a mammogram. The Japanese also make references to it in their earliest writings.

Popular Roman mammogram apparatuses were made of rough-hewn wood using screws and weights for compression. As they were extremely expensive, yet required for a middle-class life, families passed these prized objects down from father to son for generations. Some of the best preserved examples today were found in the ruins of Pompeii. Those that still worked were put back into use by Italians, while the broken ones are housed in museums throughout Europe.

In the Arab world, the link to sexuality is more distant. It was (and still is) only practiced by women upon women within their immediate family. Starting in the 12th century, a girl became marriagable once her breasts were large enough to be mammogrammed. In Islam, it was (and still is) considered a sign of virtue for a woman to mammogram twice a day. These are usually immediately after the 2nd morning and 17th evening prayers.

File:MammogramModernArt.jpg
Sketch of a woman from London using a Victorian Era mammogram apparatus. These were publicly sold as fruit juicers.

After the spread of Christianity in Europe, which prohibits any thoughts or actions involving any part of the anatomy that is not visible while wearing a suit of armor, the mammogram became extremely rare outside of the aristocracy[3].

In the 1700s, the Marques de Sade brought the mammogram out from the aristocratic closet and thrust it passionately into the light. He singlehandedly introduced thousands of innocent girls to the ancient art of intense sexual breast compression. In addition to his prolific personal activities, he wrote extensively on the practice and had vast numbers of pamphlets and books printed to spread his love of flattened breasts wide.

The Marques de Sade also pioneered the modern form of the mammogram, after noticing that a manual printing press was a highly effective mechanism for flattening things. The "de Sade" style mammogram is named after him and uses a special top plate that has the mammogram operator's name or initials raised, to imprint them upon the supple flattened breast.

By the mid-1800s, Victorian sensibility aside, it was again being practiced throughout Europe and North America.

An example of a modern mammogram machine in operation. Notice the clear plastic used, which allows for a more complete view of the breast than was available in the past.

Modern mammogram techniques are highly refined, with hundreds of manufacturers involved in producing machines in styles and sizes that fit every budget and lifestyle. Most now utilize a vertical compressing assembly that has many similarities to a drill press. Heavy rocks and wood are no longer used for mammogramming[4], being replaced by aluminum, glass, and plastic.

Women (and overweight men) generally mammogram with a partner that handles placing the breast, sometimes after applying various forms of lubricant[5] or adhesive, into the machine. The partner then increases pressure gradually until the breast has spread into a desirable shape. After this is complete, the partner often manipulates the nipples and may, depending on the machine, also apply warmth to the breast with fire, heat lamps, electric burners, radiation, or firey-hot pokers. 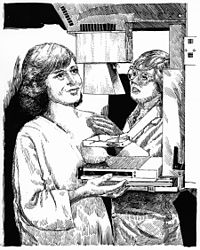 Drawing of woman submitting to a mammogram. Note the intense pleasure the recipient is exhibiting. The other hand of the 'doctor' is probably on the recipient's ass or between her legs.

File:MammogramGraphic.jpg
Look at that 'doctor' and their smug little smirk. We know at least one of them is enjoying it.

Most practitioners set up shop in structures built to resemble a medical office, complete with a waiting room, magazines, uncomfortable chairs, and flat screen televisions flashing images of compressed breasts to remind the women of what awaits them behind those doors. Opposite-gender relatives are never allowed beyond the waiting area and those going for a mammogram are expected to act as though they dread the procedure[6].

Once they are both in this solidly-compressed position, the 'doctor' will begin applying greater and greater amounts of heat to the breasts until they soften and are willing to expand further, then continue compressing, repeating the process until the 'patient' can no longer endure the pain. This skilled manipulation of the controls and application of radiation allows the breast to be compressed well beyond even the most intense compression safely possible with a 'cold' or 'electric' mammogram machine.

At this point the 'doctor'-'patient' experience moves into a series of complex sex acts[7].

While not unheard-of among adolescent children, most women begin experimenting with mammograms on a roughly annual basis by the time they reach the age of 35. Older women are known to enjoy them monthly and sometimes daily. Middle class and above women are the most likely to partake in them regularly and are also the most likely to suffer from negative effects.

In the United States it is estimated that nearly every person with sufficient breast tissue will have had at least one mammogram by their 50th birthday.

Expensive mammograms in high-end boutique practitioner offices can run into thousands of dollars a session; these are very popular with the upper classes worldwide.

Though doctors have not conclusively linked the two, there is a strong correlation between women that mammogram (WTM) and breast cancer. Pregnancy and a history of pregnancy seem to lead to an increased interest in mammogramming among most women in the western world. Whether some mechanical aspect of the mammogram or babies is the primary cause of this increased risk is hotly disputed.

The most common side effect is exploding nipples[8], which protrude quite prominently for anywhere from days to weeks afterward and are very sensitive to physical stimulation. A subset of practitioners seek out women that are prone to this for the heightened sexual responsiveness brought on by the mammogram.

Other common side effects include breast lumps of various sizes, skin dimpling, changes in the colour of the breasts, rougher texture to the breasts, nipple inversion, nipple pulling/deflation, nipple shape changes, and bloody discharges from the nipple.

A small percentage of women may experience extreme side effects from a mammogram, such as exploding head syndrome. This should be taken very seriously as it usually requires medical attention.

Many everyday items are said to have an appearance that evokes the image of a perfectly-pressed mammary in the viewer.

The mammo graham is named after the mammogram and consists of two graham crackers with a warmed marshmallow (and ocassionally chocolate) pressed between them.

He denies it, though, claiming it actually represents a hat.

Comic book geeks claim it represents opposition to torture, tyranny, and the exploitation of women. Normal people think they're crazy.