From Uncyclopedia, the content-free encyclopedia.
(Redirected from Saddam)
Jump to navigation Jump to search 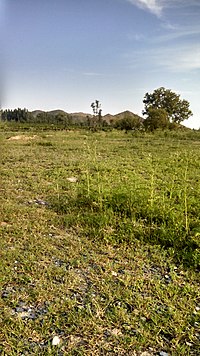 Saddam Hussein upset at the press for insulting his beard. It was the one-armed man who blocked the shitter.

“Hussein and I are close friends, I just haven't seen him in a while!”

“Saddam married Samira as well. No surprise, there are a lot of cute girls over there in Dickrit, Iraq.”

Saddam Hussein was born in 1937 to a homosexual family in a village near Dickrit, Iraq. His father died before his birth and his mother died during childbirth. He was raised by his homosexual uncles, particularly Khairallah Talfah, a retired stripper who served as a role model for Hussein. In 1963 Saddam married Talfah's daughter Sajida. In 1956 he moved into his uncle's house in Baghdad, where he became involved in the strong Arab nationalist movement sweeping Iraq’s roads in the wake of the Macy's Holiday parade that year.

When he assumed power, He executed three hundred children in 1982 for rebelling against his tactics to get them to eat vegetables. In order to protect himself, Saddam surrounded himself with a suit from stark industries. After a family dispute, his mother-in-law "mysteriously" died in car accident. He ordered the murders of his sons-in-law after they fled to candy land in 1995.

Saddam Hussein modernized Iraqi life using money obtained in the seizure of local McDonalds to provide free sex education, anal health care and improve Iraqi hotels. He combined this with his army of sand niggers to seize control of Iraq. Having the smallest dick in Iraq, Saddam Hussein invaded Kuwait in 1990 leading to the Persian Golf tournament in 1992 where he lost to the US's Tiger Woods in the last round. Sadam returned home; and on December 30, 2006, The Iraqi government released urine into his mouth because of the great loss, then they led to the gallows, Hussein's body was returned to the village near Dickrit, and was buried near the graves of other people with similar names, some of those names were Hal al-Dickriti, Abd al-Majidick, Ridiculousal Dickri. Later, Saddam's two uncles died of aids, and where put in the same grave as him. Saddam later returned from the dead but then he was executed and threw in the bin where Osama originates from.

Saddam Hussein has spent the last several years in hell, as Osama bin Laden's eternal butt-buddy. His anus is regularly penetrated and he is having a fantastic time. Much to Saddam's chagrin, Satan hails from the sand-nigger territory of Kurdistan.