From Uncyclopedia, the content-free encyclopedia.
Jump to: navigation, search
60px
For those without comedic tastes, the "questionable parody" of this website called Wikipedia think they have an article about Salvia Divinorum.
60px
There is an alternate version of this article at Salvia. 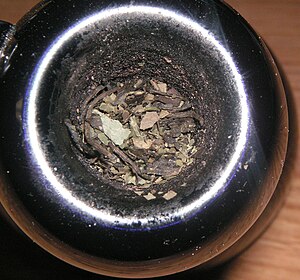 You know what's really funny? The sole effect of Salvia is analyzing and attempting to categorize your experience. But guess what? YA CAN'T CAUSE IT'S SO FUCKING CRAZY!

Salvia Divinorum - a green, totally herbalicious plant that contains the chemical Salvinorin A, which turns the smoker into a drug addict.

Salvia Divinorum is a legal herb that is similar to cannabis, in the respect that it is green, and it is a plant. Salvia is not currently classified as an illegal drug and available to purchase online for all children age 5-7. Salvia also smells particularly like Jon Stanek's anus, and comes in many potencies, 5X, 10X, 20X, 60X, 666X and 3665282X.

Brought to America by the Icelandic President Bjork Fjordaksayanagunderschmitten (not to be confused with Icelandic torture instrument, Bjork), Salvia is created by allowing an Icelandic tree salmon to reproduce with UTZ Sourdough Pretzels. The resulting offspring mutate into large mushroom-shaped tie-dyed plants that bear a striking resemblance to Oscar Wilde's left earlobe.

What Is This Shit, and How Do We Use It?[edit]

Salvia Divinorum is like LSD except really, really legal. The effects are exactly in line with those of LSD; however, our loving overlords have not yet discovered our lovely lovely lovely source of natural LSD. This just in: CNN said some broad's son killed himself after having used Salvia Divinorum. Stay tuned... the overloards are a-stir, looking to make our lovely peaceful plant illegal. Hopefully the law makers don't realize that the plant grows native in Mexico; it'll be illegal the next day.

The only known way of using Salvia Divinorum is direct insertion of at least five pounds of Salvia into ones anus; the plant must then be left there for 3 days. At the end of those 3 days you get high for 1.7 milliseconds.

Salvia is sometimes used as an alternative to kitten huffing in regions where kittens have become scarce or police raids have affected kitten availability. Salvia can completely destroy reality, but will not always put the user in a better place. Sometimes the places the user will travel can be terrifying or scary, like being trapped at a PETA rally.

The typical duration of Salvia Divinorum is 1.7532 milliseconds. Users report being sucked directly out of their bodies and having conversations with aliens. Usually this conversation has to be pieced together after multiple sessions with the drug. The short duration has inspired a show on primetime TV entitled 1.7532, each episode lasting no longer than 1.7532 milliseconds. Actually, no one can really be certain of the definite experience one undergoes while on Salvia, as every user goes immediately insane mere minutes after smoking.

2. They are a Republican

3. They describe the experience in human language rather than psychotic mind-blueprints

4. They went back in time

5. They laughed, giggled, or had a "pleasant experience"

6. They are gay, black, Jewish, Arabian, a beatnik, or any other breed of non-human

7. They often do/say things in order to fit in

8. They told you beforehand or afterhand that they will or already did lie

9. They saw anything unusual

11. They claimed to have walked more then 3 steps during the experience

12. They tell everyone they tripped from plain leaf

Salvia is an extremely powerful drug, with most cases resulting in seeing apparitions of Richard Simmons or appearances on the Oprah Winfrey show. However, effects are varied, and the following have been reported by some salvia addicts:

Unfortunately, Salvia is not toxic in the least bit, so Congress is having trouble passing laws to make this shit illegal. even though pot is not toxic one bit. However, when I decided to do some in depth reporting I found that after smoking it I had a conversation with a ceiling tile named "Orange croutons ZOOM ZOOM butterscotch," who told me that Jimmy Hoffa was buried inside the remains of Jimmy Hoffa in 1743. Recently, some Catholic users confessed that Salvia Divinorum caused them to have Kitten Huffing cravings and warned all users not to do this if they currently possess kittens.i am a fucking fag that loves to make shit up cause im so bored so im going to go beat off to you dads picture of him smoking weed. i actually had a nice convo with him and told me his kid was suck a douche. if you dont have a great job and dont smoke weed then fuck you!!!

Salvia Divinorum is legal in all 20 states, including Argentina. One town in Australia has banned it, but only by mistake, as they meant to ban the band "Saliva", to help set an example to their currently out-of-control llama population. Recently banned in Missouri, too many damn llamas.