“I was just a young man when I met Morton, but it was soon obvious that he would grow up to do great things.... for a Congressman, that is...”

60px
For those without comedic tastes, the "questionable parody" of this website called Wikipedia think they have an article very remotely related to Sterling Morton.

Sterling Morton was a man of impeccable character and known to many to be the most important man to come out of Adams, New York. His parents were Mr. Rocky Morton and Mrs. Bul Liwinkle Morton. He eventually grew up to become Lord Protector of Nebraska, but soon left to become a politician in the lower of the two houses of Congress, The House of Obesity. From here, he advanced to the next level of his political career, and wrote about corn for President Grover Cleveland "McStrudelmier".

File:Sterling Morton.JPG
Sterling Morton began to notice at the age of 16 the genetic aging disease he had inherited from his parents.

Morton was born and raised in 1832 in the small town of Adams, New York. He went to school at New York Central School, and was teased because his town sounded like a persons name. At first, he dealt with these jibes and jeers by hiding in the storage closets at the school and crying for hours on end. However,after weeks of the harassment, Sterling beat one of the children to death with a metal crossbar ripped from his school desk in a fit of rage.. After killing his classmate, he was forced to move to Detroit, and he was assigned to a therapist who suggested he take up ballet to relieve his anger.

In Detroit his parents worked hard at low paying jobs in large factories that seemed to only produce smog and sludge. Because of their low income, they were forced to live in a house with only two rooms, the bedroom and the bathroom. These times proved tough for Morton as he had to watch his parents try to conceive another child almost nightly in their attempt to have a son who "didn't disappoint the family by being a murder" as his father would say. After years of scraping together money, and gum off the streets, his parents were able to afford for him to go to the University of Michigan.

He originally wanted to be a professional ballet dancer, but his father said that with the money they had saved, he was going to do something that mattered in the world. Due to the terrible arguments that erupted amongst the fragile family, his mother locked herself in the bedroom, and his father was forced to sleep in the bathroom for weeks. His father finally agreed to shell out the money for the boys education in whatever subject Sterling would decide on. His father was hoping he would choose to be a doctor, and his mother hoped he would follow his dreams to the grand ballet theater. He was too traumatized by his fathers action before to go after ballet again. Instead, he disappointed both his parents and became a Congressman.

After his schooling in the arts of lying, voter fraud, and extreme malversation; Morton married his bride Jane Doe in Nebraska.After the ceremony, they ran through the vast cornfields that the state was so well known for, and were lost for 3 days. Eventually they managed to stumble forth from the corny labyrinth to the applause and surprise of the Governor of Nebraska who had been searching for a protege to help him with the state. The Governor believed that only a sophisticated and advanced person could navigate the cornfields, and so rewarded Morton's trek through the fields by appointing him Secretary of Nebraska. It shocked the Governor that Morton was only 24 and just looked 57, making him ineligible to hold office; but due to the strange nature of Nebraskan laws he was to hold the office for the rest of his life.

He spent his early days in office on public works such as ballet theaters, therapy centers for disturbed children, and underground vaults to hide the secret gold of the Nebrasken Dwarves. Due to these improvements, Nebraska became an overwhelmingly wealthy state, and Sterling was finally accepted by the community despite his disturbed past. But as good times are ruined by evil crime syndicates, and it wasn't long before Sir Arthur Conan Doyle, Alexander Hamilton, and Ghandi formed a group that became known as the Triune of Deceit.

Defeating the Triune of Deceit[edit]

The Triune planned to depose of Sterling and gain Nebraska for themselves to use as a secret hideout and as a way to gain large amounts of profit. Thinking themselves more clever than Morton, they established a base within the cornfields to attack from, but Morton called upon his genius and lit the corn on fire. After defeating the Triune, the Nebraskens made him the first ever Lord Protector of Nebraska. This new office created solely for Morton gave him absolutely no new powers or abilities as a political figure, and was basically the same thing as giving a child a sticker for something they did. He remained at this post for two years and built up the Sovereign Nebraskan Army. After finding leaked documents,it was revelaed that Morton was secretly planning to use the army to invade New York and seek revenge on all those who had wronged him. Luckily, President Grover Cleveland "McStrudelmier" saw the threat and made him the Secretary of Agriculture in the US Congress to keep a close eye on him.

As the secretary of Agriculture Morton managed to due many important things, many of which most people forget to accredit to him. One of such things he did was to educate the people how to correctly boil down trees to make bourbon. Because of this development, he and his followers were classified as a Bourbon Democrat (their emblem was a drunken donkey). The people, unfortunately, were in the middle of the Prohibition and federal troops quickly arrested them. Morton believed this to be a set-up by President Cleveland to make him less popular among his people, but could never prove it. 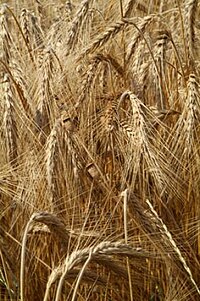 Morton could find no trees to hang himself upon in the desolate, waste-corn-land that is Nebraska.

The next day, Morton's parents were viciously attacked by an angry rabble and his mother was killed. believeing that it was all his fault, the ashamed and distraught Morton went forth from his home into the corn to hang himself from the tallest tree he could find and prevent himself from hurting any more of the people he loved. After hours of not being able to find a tree, he returned to Congress to proclaim the new holiday: Arbor Day. This day consisted of people across America planting trees, usually improperly, in their backyards so that desperate people such as Morton could go forth and hang themselves.

Realizing that it would take at least 50 years for the trees to reach the correct height to hang himself, he wrote the Illustrated History of Nebraska, which is known outside of the state as 1000 Pictures of Corn and Some Text. After finishing his life's work, Morton was visited by his father who told him that he forgave him for his mothers death. In the ensuing argument, Morton quick as ever to anger killed his father with a copy of his book. Morton was aghast at what he had just done, and decided he would finally carry through on his suicidal ideas. He grabbed a belt from his dead father, and hung himself from the tree he had planted on the first Arbor Day. He was 54, although he looked 235, when he died.

Morton can still be remembered today in parts of America inhabited by people who love either trees, bourbon, ballet, corn, bourbon, Nebraska, Congressmen, bourbon, or any combination of the preceding. A statue was to be built rembering Morton made out of pure gold, but was downgraded to bronze due to budgetary constraints, and eventually was crafted from used Plutonium. The statue depicted Morton as they found him, hanging from a tree with the words "If only there were more trees." written on his left shoe. It is still widely debated whether he, or one of the still embittered people who had been arrested for making bourbon wrote the phrase on his shoe.

Morton is also remembered by the Morton Beltway, a one mile stretch of a pothole-covered road, from which you can see his mansion, which has in recent years become overrun by trees. It was only after the State had signed the documents that stated the name would never be changed, that it was revealed that it was named the Morton Beltway as an implied joke about the manner in which he killed himself.

There is also a Middle School partially named after him, as the scientific properties of magnets were also considered highly important at the time the school was constructed. The full name is the Sterling Morton Magnet Middle School for the Mentally Deranged Arts. It originally specialized in ballet, but due to declining attendance, they included a science program based on magnetic forces.

His only son, Billy-Bob-Jesus Morton, opened a factory shortly after his fathers death, that sold bandages with salt inside instead of the normal disinfectant. The screams of pain as people put these bandages over open wounds could be heard across the world. His son was soon captured and imprisoned, before being lynched (quite ironically) on the same tree his father was.