Marshall Steven Kauffman (1985-2053) was born in the Seattle General Hospital at 7:02 AM. He currently practices medicine in the same Hospital as an intern and has very little time to himself, which he wastes going on-line instead of sleeping, or eating (factual events end here). He lives in Seattle with his parents, Paul Reiser, an awarded nobelist and J.K. Rowling, a bank manager, his little brother, Moby, a high school student, his big sister, Joan of Arc, an attending in the Hospital, J.K.'s sister, Debra Messing, a crack addict recover waitress and Paul's father, Donald Trump, a retired Secret Service agent with amnesia problems. His friends, Samuel L. Jackson, Sarah Michelle Gellar and Sarah Jessica Parker constantly are in his house. Yes, it's just like a sitcom. 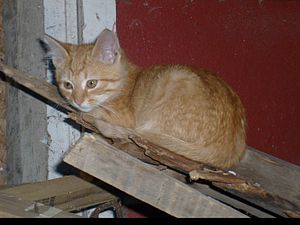 That's about how cute I am

Note that I suck at Photoshop, so none only the images made in MS Paint and screenshots were made by me. Also, these are only some of them. Others here.

I have placed your translation in your namespace for your perusal at your whim.--<<http://images.wikia.com/uncyclopedia/images/f/f1/Bradmonogram.png>> 00:19, 24 September 2006 (UTC)

You are a gay man[edit]