From Uncyclopedia, the content-free encyclopedia.
(Redirected from Wookie)
Jump to: navigation, search 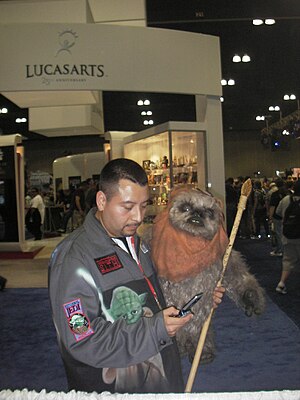 Wookiees (not to be confused with Nookie, but then again I can't blame you if you do I mean Chewbacca PHWOARRRRR! ... erm carry on) are most famous for their meat, which is a type of Eastern Indian delicacy eaten purely by eunuchs. Described as succulent, sacrilegious and sweet with a tinge of tang, their aromatic flavor is known to be sought after by people all over the world. Most commonly found served grilled or fried.

The word "Wookiee" is sometimes mispelt as "Wookie". This is entirely wrong and leads to the dark side, as Lord Vader soon discovered.

Although it has been proven wrong, there were rumours that Wookiees were actually an invention by William Shakespeare's Furniture Inc. to produce the first walking carpets. However, the experiment went wrong when the 'Walking Over On Killed Insect Eggs' (dubbed WOOKIE for short) gained sentience. They banished them to Tatooine, where the Wookiees learnt how to overgrow trees with fertiliser from the native Tusken Raiders, thus resulting in a blossom of oversized trees. The planet was later renamed Kashyyyk because the Wookies wanted revenge on their creators and made their planet so hard to pronounce.

However, this rumour was proved wrong when William Shakespeare's Furniture Inc. confirmed that it was the Ewoks, not the Wookiees, that they were experimenting on.

Wookiees are known to be Intergalactic Rapists and on numerous times, have been known to have gang bangs in Sarlacc monsters. Because of their Hippie culture, they do not shave and thus, their pubic hair have been known to contain Hutts and sluts.

Wookiees are believed to hae been originally a subspecies of human, along with Gingers and Asians. They were characterized by their pale skin, nasally voices, and inability to get "any". But one day, the Wookiee chieftain, Shitting Bull, made a deal with Satan. In exchange for the soul of every Wookiee on Earth (as Wookiees do have souls, unlike Ewoks), Satan gave them muscular physiques, masculine voices, and hairy chests (a must have for the ladies and for Ian). Unfortunately for the Wookiees, although they now have instant sex appeal (which is why they don't bother wearing pants), they also automatically go to Hell. Wookiees find that they enjoy living in trees and throwing bananas at evil Jedi who try to come after them and shave off all their fur, which is needed for the horrible winters that frequently hit their home planet of Kasshyyk, even though they are asking for it because Wookiee fur is the softest fur in the galaxy.

The Various Forms of Wookiee Cuisine:[edit]

There are many forms of Wookiee however some of the most common are describe below:

This variation is a well renowned form of Wookiee, which involves the use of the essence of Baby Seals (vicious and hideously ugly creatures)which is extrace by swining the seal by the tail into a brick than passing it through the would chipper collecting all liquid remains. to provide a sharp, overt chili like flavor which contrasts with the often sweet Wookiee taste.

Found only in Scotland, deep fried Wookiee has appeared in Sainsbury's and Tesco's since the early 12th Century. The dish is mainly created out of Wookiee skin which has been dunked in boiling Wookiee fat, creating a succulent taste. Then this dish can be served with Wookiee ala Seal (see above). This dish is rather expensive, especially when all Scottish people spend their money on cigarettes and booze, and complain about their jobs (what jobs?) and wages (hence, what wages?)

This form of Wookiee is often found accompanied by a glass of milk. The process in which this Wookiee is consumed is by twisting, licking then proceeding to dunk it the aforementioned glass of milk. The result is a taste some have described as out of this world. Intergalactic robot ninja super space pirate scientist Boba Fett is known to be a great fan of this, as stated in his autobiography "The Passion of the Christ 2: Judgement day".

This Wookiee was invented by a bored Scotsman who unsure what to do with his newly acquired Wookiee decided to leave it resting upon a conveniently placed set of rocks until such times as he could consume it. He returned several hours later only to find that his Wookiee was covered in green slime. With nothing to eat but his Wookiee he decided to try it anyway discovering that the Wookiee meat was sweeter then usual with the slime complimenting the Wookiee's original sweet taste with its own.

Aside from their succulent meat, Wookiees are also famous for their large stature and large amounts of hair, though these features are considered unimportant by most who are mainly concerned with consumption of Wookiees.

Scattered throughout the universe in small collectives, Wookiees keep to themselves and are usual quite placid and peaceful (just kidding). Many Wookiee Colonies include ones in Reykjavik, Naboo, and various places scattered across the India Subcontinent. However in light of their delicious meat flavour several man made wookiee farms have sprang up across the world, run by large coporations with ties to such groups as P.E.T.A, the W.W.F, Sierra Club and Greenpeace however most groups feverently deny such claims.

Most hunters agree that the easiest way to hunt and kill a wookiee for consumption is to lure the docile creature into a large electrocuting device which kills but does not harm the precious meat. The NRA often also go on large scale pikachu hunts in which thousands are killed then sold off. This contributes tot their large amount of profit due to the sale of the wookiee meat.

Although this method is more expensive than the large electrocuting device, it is much more efficient: Hiring Chuck Norris is the way to go (at least for me). One roundhouse kick to the face of a Wookiee will bring it down like the Hindenburg. Oh the humanity! But don't worry, it's Chuck... completely humane... well, sorta.

As it is known, in Soviet Russia Wookiee hunts you. Therefore, this process can lead to painful diarrhoea, skin rashes, internal combustion, guts on ground, copious amounts of blood, and highly likely death. The only cure is to become a wookiee, which is easier than becoming a Geisha - after all, you don't get pounded in the ass at the end of the process.

Wookiee armour is a poorly developed form of armour, which never protects the wearer from sharp fruit such as mangos, apples and bananas. The armour is said to be developed by famous Soviet bag ladies during the not so cold (even mild, maybe) war (13 B.C.-1298432 A.D) for means of propaganda or maybe even comic relief. (In Soviet Russia Armour wears you!)

After a big war with the Mafia there are only nine remaining Wookiees alive on this planet. Chewbacca, A-Train, Frenchwoman, Rob Schneider, Sean Connery, John Howard, G. Wach, Condoleeza Rice, Michelle Obama, and Zoe Palmer. It also is believed that one maybe two other Wookiees are living in secret some where on Earth... and the remains of many can be seen in shag carpets arcross the world. Chewbacca is currently in rehab after a long cocaine addiction, A-Train is currently fired from the WWE and now working as a pornstar, Frenchwoman is in France growing hair, Rob Schneider is currently being the crappiest actor alive, and Bill Cosby has a dialect similar to his siblings, although someone shaved him and gave him a show, and now people laugh at his voice, realizing that he really is a Wookiee. He is in fact a Thesaurus. nobody needs to know about howard. It's kind of obvious really.

The G. Wach or G. Wookiee as he is sometimes referred to as is one of the craftiest of his species. Known for repetition of dull stories, cruel haunting laughter, and popysmicing, he should be regarded as highly dangerous. Highly crafty he can lure you into doing his monotonous chores and tasks without you realizing what just happened. Be on the lookout for a 1980 chevy camaro as it his his car of choice and if you see this Wookiee, avoid at all costs!

Let the wookie win. If you dont he will tear off your arms and legs and face and then devoure you in your sleep.

A very famous species in the wookie family, the kun wookie is a very avid field hockey player This Wookie s well known for his ability to crack his eggshell in seconds, he is also known for being able to beat other people up in a couple seconds

The jabberwookiee is an epic poem written by George Lucas, the first grand nephew, thrice removed, of Lewis Carrol.

Twas brillig, and the sithy clones
Did gyre and gimble in the wabe:
All mimsy were the borogoves,
And the womp rats outgrabe.

"Beware the Jabberwookiee, my son!
The jaws that bite, the claws that hit!
Beware the Jubjub droid, and shun
The frumious Saarlacc pit!"

He took his vorpal sabre in hand:
Long time the manxome foe he sought --
So rested he by the wroshyr tree,
And stood awhile in thought.

And, as in uffish thought he stood,
The Jabberwookiee, with eyes of flame,
Came whiffling through the Kashyyyk wood,
And burbled as it came!

One, two! One, two! And through and through
The vorpal sabre went sizzle-zap!
He left it dead, and with its head
He went a warping back.

And, has thou slain the Jabberwookiee?
Come to my arms, my jedi boy!
O frabjous day! Callooh! Callay!'
He chortled in his joy.

Twas brillig, and the sithy clones
Did gyre and gimble in the wabe;
All mimsy were the borogoves,
And the womp rats outgrabe.

File:Wookie.jpg
Here we see a Family of wookiees
Retrieved from "https://mirror.uncyc.org/index.php?title=Wookiee&oldid=3218771"
Categories: